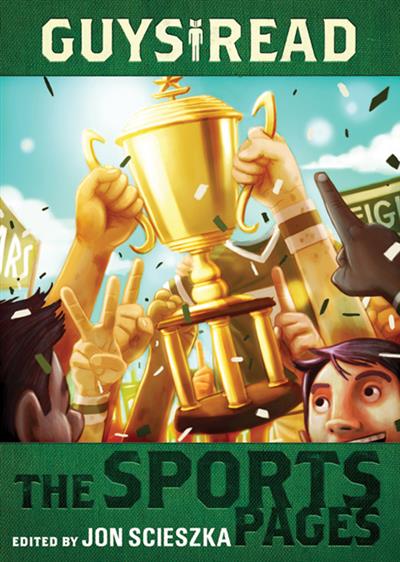 By Jon Scieszka, By Gordon Korman, By Chris Rylander, By Dan Gutman, By Anne Ursu

Loading...
The Sports Pages, thethird volume in Jon Scieszka's Guys Read Library of Great Reading, features ten short stories guaranteed to put you in the ring, under the basket, and right View more
Save for later

Jon Scieszka is the National Ambassador for Children's Literature emeritus and the bestselling author of more than twenty-five books for kids, including The Stinky Cheese Man and Other Fairly Stupid Tales, Math Curse, Robot Zot!, and the Time Warp Trio series. Jon founded Guys Read to encourage a passion for reading among young boys, with the philosophy that boys love to read most when they are reading things they love. A former elementary school teacher, Jon lives in Brooklyn with his family. For more great books, more great facts, and more about your favorite authors, head over to www.guysread.com. You'll be glad you did. Dan Santat, the author and illustrator of The Guild of Geniuses. He's also developing his own animated television show. Gordon Korman published his first book at age fourteen and since then has written more than ninety middle grade and teen novels. Favorites include the New York Times bestselling Ungifted, Supergifted, The Unteachables, Pop, Schooled, and the Masterminds series. Gordon lives with his family on Long Island, New York. You can visit him online at www.gordonkorman.com. Chris Rylander is the author of the Codename Conspiracy series and the Fourth Stall saga. A fan of chocolate, chips, and chocolate chips, he lives in Chicago. You can visit him online at www.chrisrylander.com. Dan Gutman is the New York Times bestselling author of the Genius Files series; the Baseball Card Adventure series, which has sold more than 1.5 million copies around the world; and the My Weird School series, which has sold more than 12 million copies. Thanks to his many fans who voted in their classrooms, Dan has received nineteen state book awards and ninety-two state book award nominations. He lives in New York City with his wife, Nina. You can visit him online at www.dangutman.com. Anne Ursu is the author of Breadcrumbs, which Kirkus Reviews called a transforming testament to the power of friendship in a starred review, and was acclaimed as one of the best books of 2011 by The Bulletin of the Center for Children's Books, School Library Journal, Publishers Weekly, Amazon.com, and the Chicago Public Library. It was also on the IndieBound Next List and was an NPR Backseat Book Club featured selection. She was also the recipient of the 2013 McKnight Fellowship Award in Children's Literature. Anne teaches at Hamline University's MFA in Writing for Children and Young Adults. She lives in Minneapolis with her son and four cats--monster fighters, all. Tim Green, for many years a star defensive end with the Atlanta Falcons, is a man of many talents. He's the author of such gripping books for adults as the New York Times bestselling The Dark Side of the Game and American Outrage. Tim graduated covaledictorian from Syracuse University and was a first-round draft pick. He later earned his law degree with honors, and he has also worked as an NFL commentator for FOX Sports and NPR. His first book for young readers, Football Genius, inspired in part by his players and his own kids, became a New York Times bestseller and was followed by Football Hero, Football Champ, The Big Time, and Deep Zone. He drew on his experiences playing and coaching Little League for Rivals and Pinch Hit and two more New York Times bestsellers: Baseball Great and Best of the Best. Bestselling author Jon Scieszka called Tim Green's Unstoppable, a book about a boy's struggle with cancer that debuted at #2 on the New York Times bestseller list, Absolutely heroic. And something every guy should read. Tim Green lives with his wife, Illyssa, and their five children in upstate New York. Joseph Bruchac is the author of Skeleton Man, The Return of Skeleton Man, Bearwalker, The Dark Pond, and Whisper in the Dark, as well as numerous other critically acclaimed novels, poems, and stories, many drawing on his Abenaki heritage. Mr. Bruchac and his wife, Carol, live in upstate New York, in the same house where he was raised by his grandparents. You can visit him online at www.josephbruchac.com. Jacqueline Woodson is the 2014 National Book Award Winner for her New York Times bestselling memoir Brown Girl Dreaming, which was also a recipient of the Coretta Scott King Award, a Newbery Honor Award, the NAACP Image Award, and the Sibert Honor Award. She is also the author of New York Times bestselling novel Another Brooklyn (Harper/Amistad), which was a 2016 National Book Award Finalist and Woodson's first adult novel in twenty years. In 2015, Woodson was named Young People's Poet Laureate by the Poetry Foundation. She is the author of more than two dozen award-winning books for young adults, middle graders, and children; among her many accolades, she is a four-time Newbery Honor winner, a three-time National Book Award finalist, and a two-time Coretta Scott King Award winner. http: //www.jacquelinewoodson.com/
Close